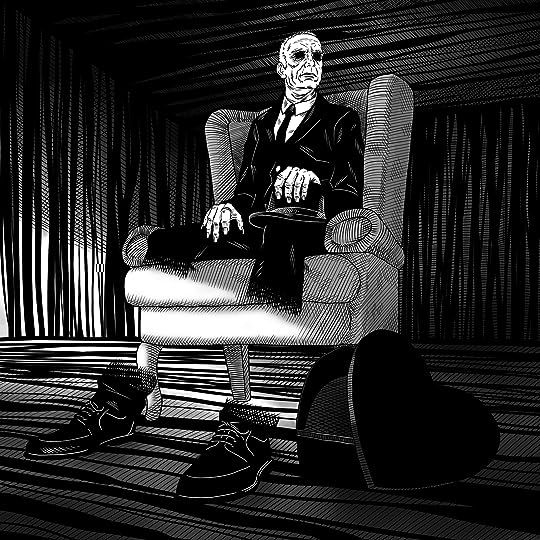 Judas Coyne, a middle aged rocker and the lead singer of the popular band, Jude’s Hammer, is a collector of the macabre; a cookbook for cannibals, a snuff film, a hangman’s noose, Jude’s got it all.

However, he’s going to wish he wasn’t an occult fanatic pretty soon.

One day, his assistant Danny Wooten, comes to him with an advertisement of an online auction, where the auctioneer claims to be selling the ghost of her dead stepfather.

Jude already intrigued, puts in his bid but little does he know that the game is rigged and that he’s signed himself up to ride the night road with a dead man willing to do anything in order to make Jude feel pain and suffering for a crime he did not commit.

Now I did like the character development in this book, especially the relationship between Jude and Georgia (Marybeth).

I feel like after the hell they went through, no bond could be stronger than theirs.

Also I loved how loyal, protective and intelligent Jude’s dogs were, it was adorable seeing them interact with their owners, and terrifying to imagine them when they were angry.

I also enjoyed reading about Anna (Florida) and I loved that despite everything that happened between her and Jude, she kept her word and helped him in the end.

Lastly we come to Marybeth, more commonly known as Georgia throughout most of the book.

Can I just say that she is a complete badass! Honestly I was so happy when I was reading about her because she doesn’t act like a damsel in distress; she uses her head and gets stuff done.

Yeah, she’s scared who wouldn’t be in their situation? But despite that, she does everything in her power to keep herself and Jude alive and that’s a respectable quality in a female character and one I admire greatly.

Where to start? So to begin with, I did enjoy the book, it’s not one of favorites but I definitely liked it.

There were quite a few new ideas and concepts presented in this book that I enjoyed for example the hypnosis, the dog souls, the power of pain and the reality of truth.

Those are just a few key concepts I liked. Next to that I also enjoyed the fake death report scene in Jude’s house, which was brilliant.

I was so shocked by it and I think that was something to really suck me in. You cannot imagine the relief I felt when I read about Jude switching off the T.V.

I actually had to reread that paragraph, three times before I calmed down enough to move on.

Anyways, I also liked the plot twist; you’d never expect it from dear old Craddock now would you?

I didn’t and that’s one of my first complaints, the plot twist came out of nowhere. Normally I like to guess as to what the twist is but this one seemingly came out of the blue.

Another thing I didn’t like was the lack of introductory pages, normally I like to read books with a bit more back ground on the characters in the beginning and then that background is built on throughout the course of the book.

This novel didn’t have as much background in the start but made up for it in the middle.

My last complaint is another minor one: it was too fast paced, I mean thirty pages in and the ghost is already trying to kill Jude.

Other than these things and a few others that I won’t mention as I don’t want to spoil anyone, I enjoyed this read. I’m looking forward to reading more of Hill’s work in the future.

If you like old time rockers who can put up one hell of a fight and old ghosts who go to any extreme to get what they want, go read this.

Photo by Alexandre St-Louis on Unsplash