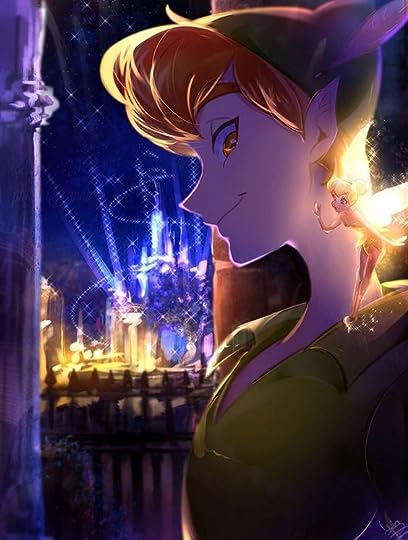 The Darling children always loved the stories their mother told them before bed: stories of a boy who lived with fairies, who never grew up. Stories about Peter Pan.

But little did Mrs. Darling know that these stories would attract the hero who was their sole focus. Peter Pan flies into the children’s nursery one night only to frighten Mrs. Darling and lose his shadow. He returns later that night to retrieve his darker half but breaks down when he realizes that he cannot attach it to his form once again. His cries wake Wendy, the oldest of the children, and the little girl being the motherly child she is, helps Peter.

The boy from Neverland takes an immediate liking to Wendy, despite his hatred for mothers and persuades her to follow him back to Neverland, where she is to be a mother to himself and the lost boys. And that is where the adventure of a lifetime begins.

Where to start? I really enjoyed this read, and I know for a fact that it’s definitely going to stay with me for a while. I enjoyed the concept Barrie presented and I must admit I too have a fear of growing up just like Peter. The original story is much darker than I anticipated but it still has that magical element that draws you in and acts as a cover for the much more sinister on goings in the background.

I adore Peter’s personality along with Wendy’s but I do wish that some of the supporting characters were developed a little more.

Moving on, the ending was wonderful! Sometimes it feels like the book is leading nowhere but that is not the case. The ending ties everything together beautifully and personally for me it really pulled at the heart strings.

Overall great read, if you’re worried about the language then don’t be. It’s not too easy but it’s not that difficult either. Once you get into the flow of things it’s not that hard to keep up.

That being said, if you like magical places and adventures go read this.

Image via Pinterest
Photo by Casey Horner on Unsplash