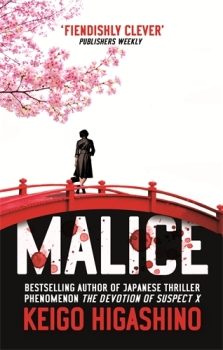 He had never imagined that such malice existed in the world.

Malice tells the story of two writers, Hidaka and Nonoguchi. The two of them seem like the best of friends, however, things take a dark turn when Hidaka is found dead in his near empty house a few nights before he and his wife are to depart for Canada.

Detective Kyochiro Kaga is put on the case and realizes that the victim’s best friend was the very same man he recalls from his days as a teacher. Working to not let this past relationship impact his judgment, Kaga strives to solve the crime by use of common sense and analysis.

Finding the murderer wasn’t their biggest issue. Even with an arrest and brief confession, this case wouldn’t hold up in court. There was no clear motive and their evidence was circumstantial at best. So, needing to dig a little deeper, detective Kaga returns to the murderer’s apartment and a shocking discovery will have him playing a game of cat and mouse in order to find the truth behind this malice.

Well if you haven’t figured it out yet, this was a Japanese novel translated into English. And I must admit I was blown away by its cleverness and originality.

This book tells an amazing story and while there isn’t much action or glory, the element of surprise makes up for those missing components. This read documents the thrilling game of cat and mouse the detective and the murderer play and it had me guessing at every turn. Even when I thought I knew what was going on, a new twist woke me up and had me going down an entirely different path of possibilities. This novel kept me on my toes and I would highly recommend it to those of you who are fans of gone girl.

I guess the only complaint I would have is the lack of description. This book is mostly talk, there isn’t a lot of action and half of the time I simply found the characters sitting around and mulling over their thoughts. And my opinion, the ending wasn’t really all that spectacular but then again this is more talk than action, so that’s not surprising.

But overall great book. If you enjoy manipulative thrillers, then go read this.

3 thoughts on “Malice by Keigo Higashino”