A Study in Scarlet by Sir Arthur Conan Doyle

*keep in mind I have not finished the complete series. I have only read A Study in Scarlet.

Dr. John Watson returns from the war sometime in the late 1800’s. He had been injured during the battles abroad and had to be shipped back home to recover. For a time, he doesn’t know what to do with himself, he wanders aimlessly wasting away his days and pension from the military. He yearns for company but doesn’t know how to approach the subject until a wonderful opportunity  drops into the palm of his hand. As his pension grows thin, Watson can no longer afford to live in a hotel and decides to find an apartment to rent and share with a flatmate.

This is how he meets everyone’s favourite consulting detective, the one and only, Sherlock Holmes. John finds Sherlock to be a bit…eccentric but as they work together to aid Scotland Yard on a rather puzzling case, the two learn to accept their differences and grow to like each other.

The case in question is one of a long history of hatred and determination, of religious beliefs and refusal to fully conform. It is a true example of pure anger and need for justice. After all, still waters run deep.

John and Sherlock are polar opposites of each other. Sherlock is eccentric, excitable, honest and observant. He is perceived to be cold and standoffish in terms of social interaction, but in truth he simply does not understand the idea of society’s social functions and norms.

John on the other hand is charming, polite and socially adept. He knows how to navigate society and blends into the crowd where Sherlock stands out. He is intelligent, but not on par with Sherlock. He is reserved and calm, unlike his temperamental flatmate.

These two juxtapose each other wonderfully, creating an unforgettable partnership and story. 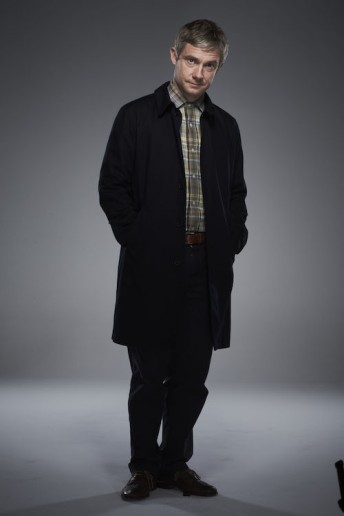 I was a little nervous going into this because it is a classic and I have an innate fear for flowery language. However, I did want to read about one of the greatest detectives of the literary world and pushed on, and surprisingly I found that Doyle’s language was quiet…blunt. It was easy to follow and understand and I found myself soon enjoying this mysterious tale.

I loved the relationship between John and Sherlock, and I liked the two detectives from Scotland Yard as well, they were quiet amusing but for the life of me, I can’t remember their names!

If you are wondering about whether or not the hit BBC series for Sherlock is an accurate interpretation of the books, then wonder no more for I will tell you. The show does not follow the books for the most part. Some characters from the books are present like Sherlock, John, Lestrade and so on but the show follows it’s own path, separate from the books. It is still very entertaining to watch so do watch it but don’t worry about spoilers, there aren’t that many or all that accurate so enjoy!

One thing that caught me off guard was the second story in this novel, you see halfway through Sherlock basically says I know who the killer is and then the story goes back to fifty or sixty years before and you’re suddenly reading about the Mormons in America. Luckily, a good friend of mine had warned me about this sudden shift in story and told me that it would all make sense in the end. Thank the lord she told me or else I would’ve been in a whole other world of confusion. So if you are going to read this then when the story shifts halfway through don’t worry it is a vital component of the tale and will all make sense in the conclusion.

Overall, I really enjoyed this, it was the good, old fashioned mystery I had been craving to read and it delivered fully. I would recommend it to anyone who enjoys mysteries and and I have just realized that you cannot be a true fan of the mystery genre if you have not read at least  one the Sherlock Holmes novels.

Well readers that’s all I have for you, I understand that my posting schedule has been a little messy lately but bear with me please, I’m going through a very hectic time right now with school and exams and so on. Once I have a little more time on my hands and  I come up with a more organized schedule, I’ll be uploading regularly.

Photo by Avi Agarwal on Unsplash