Vengeance is in my heart, death is in my hand, Blood and revenge are hammering in my head. -William Shakespeare

Warning: this review will contain some spoilers. 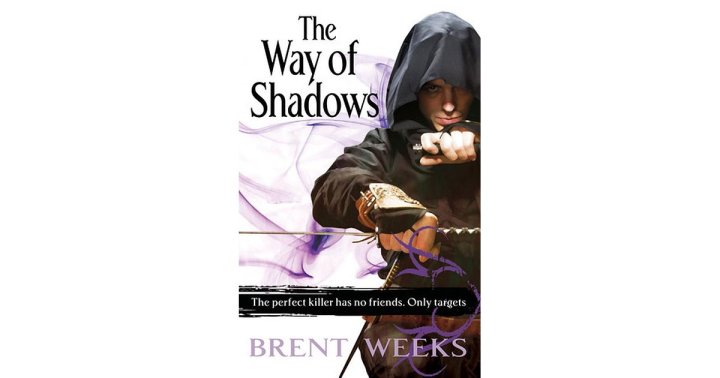 Life in the Warrens isn’t easy, especially if you’re scared little boy who has to lie, cheat and steal on a daily basis just to survive.

Meet Azoth, a young guild rat who is struggling to make ends meet and not die of starvation while simultaneously protecting himself and his friends from one of the superiors in his guild, an adolescent boy named Rat.

As if life in the Warrens wasn’t hard enough already.

To Azoth, Rat is the epitome of all that is wrong and unjust in his little world and desperately wants to be rid of Rat before the boy has a chance to do any real harm.

And that’s why when his best friend Jarl practically hands Azoth a fortune and tells him to act as an instrument in making a better life for them, Azoth tries to apprentice himself to Durzo Blint, the most famous wetboy in the city.

Wetboys are not to be confused with assassins, assassins have targets but wetboys have deaders because if a wetboy is coming after you, you’re dead already.

Azoth doesn’t want to be afraid anymore, not of Rat, not of anyone. He is in awe of Durzo because in his eyes the wetboy is not afraid of anything and is feared by everything.

And in a last-ditch effort at a better life, the guild rat tries to become his apprentice.

Durzo is hesitant at first because taking on an apprentice also means taking on a weakness but he relents and tells Azoth that if he can complete one task for Durzo, then he will take him on as his student.

He has to kill Rat.

Azoth is no killer, at least not at first, and once again he is scared to death of the hurdle before him.

He knows that he can’t survive in the Warrens for long and that Blint is his only way out but the question is can he take one life to save his own?

And the answer is yes.

Once Azoth has killed his childhood tormentor, he takes on the identity of Kylar Stern and enters into a life of murder and madness.

He trains under the command of Durzo Blint and becomes skilled in the art of assassination, while simultaneously learning about the intricacies of court politics and becoming a master of disguise.

But there are even more challenges ahead, and they will drive Kylar to the edge of insanity and then throw him over.

After all, the life of a wetboy isn’t just about killing, it’s about giving up everything for nothing.

The characters in this book were a joy read about and I have to say that Durzo and Kylar were my absolute favorites.

I love the relationship dynamics between the two of them, especially the fact that Durzo comes to see Kylar as his son as time goes on.

I also really liked Momma K’s character although I sort of despise her at the moment for betraying Kylar and Durzo, though I hope she makes up for her mistake in the next book since she was a very interesting character and I loved her till the very end.

And finally, we come to my favorites, Durzo and Kylar. I cannot tell you how much I loved these two, they were just amazing!

To start off, I really liked that Kylar didn’t just melt into his new life as a wetboy immediately.

It took time for him to adjust and recalibrate his moral compass and so on, he didn’t just jump in willy-nilly but instead took his time to come to terms with his choices.

While this was a little irritating at times, it was also more realistic because if we don’t expect a person in real life to adapt to a new situation very quickly then why would we expect the same from a fictional character?

I also liked the fact that over time Kylar had adopted some of his master’s peculiarities, such as his dark sense of humor and his tendency to be over cautious.

Overall I just really loved Kylar, and I can’t wait to see what happens to him in the next book.

Moving on, let’s talk about Durzo. Personally, I like to think of him as a ‘lovable asshole’.

He’s one of those characters who obviously cares about the people around him but has a hard time expressing his emotions.

I mean, it’s clear that he cares about Kylar and this becomes more and more obvious towards the end of the book.

Honestly, the first time Durzo called Kylar ‘son’, my heart broke a little, especially since it was during an incredibly tense scene.

Durzo likes to give off an aura of indifference, but it’s clear that he is concerned for the well being of those around him, hence the ‘lovable asshole’.

Durzo also possesses a dry and often dark sense of humor, which is something Kylar inevitably inherits from him as well.

He is quick and efficient in his work, believing that assassination is an art and must be treated delicately.

He is very intelligent and cunning and does not hesitate to use a person’s weaknesses against them.

But overall, Durzo is an amazing character and I just love him to death! (Cries. Read the book and you’ll know why)

Now that I’ve talked about all the characters I love, let’s talk about the ones I hated.

We’ll start with Elene, now a little bit of background, Elene is actually Doll Girl, she was one Kylar’s friends in the Warrens and when Kylar apprenticed himself to Durzo he set Elene up in a good home, where she would be loved and cared for.

It sounds like a fairy tale right? And in some respects, it is, which is exactly why I hate it.

I honestly found Elene to be very annoying, and the fact that Kylar was so infatuated with her drove me nuts.

Every time he saw her, it was constantly “Elene is so beautiful”, “Elene is so perfect” and “God I want to be with her but I can’t”.

It was maddening to read all of that and put up with him.

And then when he asks her for a simple favor, after everything he’s done for her, she declines and worse yet she even goes off and nearly jeopardizes his mission!

I wish that Kylar had just killed Elene when Durzo ordered him to but of course, he didn’t.

All in all, I did not like Elene because she always got in the way and was a bumbling idiot.

Up next we have Roth Ursuul, one of the chief antagonists in this novel.

I absolutely hate Roth, he is despicable and just downright inhumane. Now usually, I like the villains in stories, they’re interesting because they have reasons for why they are the way they are.

And while this doesn’t necessarily justify their actions, it offers you a chance to empathize with them.

But Roth didn’t have a reason, he was just cruel. He took pleasure in the pain and suffering of others and he enjoyed torture and senseless murder.

His plan was brilliant, I’ll admit it was well thought out and executed perfectly but while I admire his intelligence I despise him, especially because he was the person who essentially pitted Durzo against Kylar in a fight to the death.

In the end, I couldn’t have been happier when Kylar killed him.

Where to begin? If you couldn’t tell, I loved this book, it was well written, funny, intense and heartbreaking.

It’s safe to say that this is one of my favorite books of all time and I can’t wait to read the remainder of the trilogy.

This was just amazing, and it’s one of the few books that has touched me on an emotional level.

The first time Durzo had called Kylar his son was just too much but that’s not even the worst of it.

To Show you how bad t gets, I’ll put in a letter from the book that Durzo ha written to Kylar before they began their game of cat and mouse:

“Relax. Killing you with contact poison would be terribly unsatisfying.

I’m glad the third trap didn’t get you, but if you had used what you thought you knew about me instead of checking, you’d have deserved it.

“I’ll miss you. You’re the closest to family I’ll ever have. I’m sorry I brought you into this life. Mommma K and I did everything we could to make you a wetboy.

I suppose it’s to your credit that we failed. You mean more to me than I ever thought another person could.”

Kylar blinked back tears. There was no way he could kill the man who’d written this. Durzo Blint was more than his master; he was his father.

“Tonight it ends,” the letter continued. “If you want to save your friend, you’d better find me. – A Thorne”

The feels! Now, do you see what I mean?! The last half of this book was an emotional roller coaster for me and I loved every moment of it. Oh, the feels!

Anyways, moving on. While I loved this book I think my one major complaint would have to be the romantic element in the story.

Now usually, I don’t mind a little romance on the side but when it comes to fantasy novels, I feel like romance is just tedious and unnecessary, and the romance between Kylar and Elene just annoyed me to no end, but other than that this was wonderful.

The side characters got a lot of attention too, each had their own unique stories and personalities that were quiet interesting.

The plot was incredibly intricate and fast-paced.

It kept me on the edge of my seat and left me guessing as to what would happen next. (Of course I spoiled myself and took the fun out of it, oh well)

But I think that the characters were the main thing to draw me in to this book and they allowed me immerse myself in the world of the Night Angels.

So to sum up, this was an amazing read.

It was well written, the story was fast-paced and intense with its fair share of surprises and the characters were memorable.

All in all, this was a fantastic book and I would recommend it to anyone who enjoys high fantasy.

And with that dear readers, I will leave you. And as always happy reading!